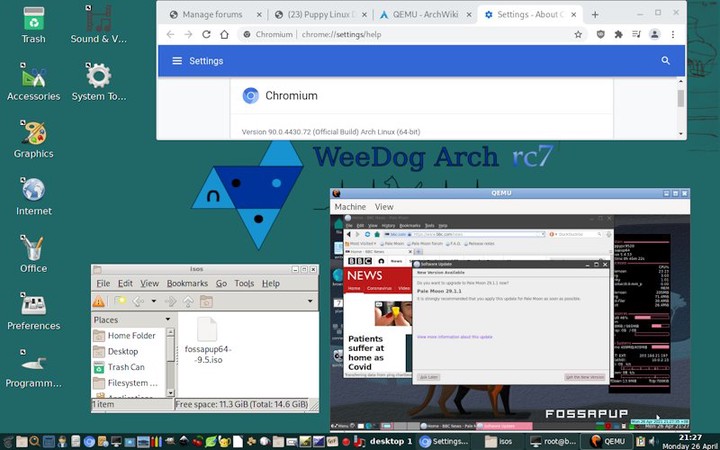 This isn't a full HowTo; just a simpler blog post that I might turn into a proper HowTo later once I experiment more.

Today's blog post is about my playing with qemu/kvm.

I used to use virtual machines every day in my job. Primarily vmware, but I was also involved in research activities/development with User Mode Linux. Mind you, that was many many years ago and my computer back then was incapable of using kvm so the likes of qemu was slow (though a bit better than bochs…). Today, however, I decided to give qemu with kvm-enable a try since my 2008 HP Elitebook 2530p (intel core2duo machine with 4GB RAM) is in fact capable of Virtualization (just need to enable it in the BIOS).

Even though this machine had a recent SSD harddrive failure/disaster, it still proves capable of using qemu/kvm despite my now booting it from but a 16GB sdcard… Using WDL_Arch64 as the host, and for first experiment using Fossapup64 as the guest system.

Once I had enabled virutalization in the BIOS, getting this running was simplicity itself and more so since WDL_Arch64 is absolutely compatible with full Arch Linux per its qemu wiki page: https://wiki.archlinux.org/index.php/QEMU

Basically, I needed to:

Which works fine. Wow, wasn't that simple…? Runs beautifully even on this terribly crippled old dev machine of mine…

Note: I also checked, using lsmod, and found that kvm-intel was automatically loaded as a module without any further work by me:

You can currently find a copy of this post at https://forum.puppylinux.com/viewforum.php?f=176 and can comment on it there if you wish.