Let us not forget KLV-Airedale 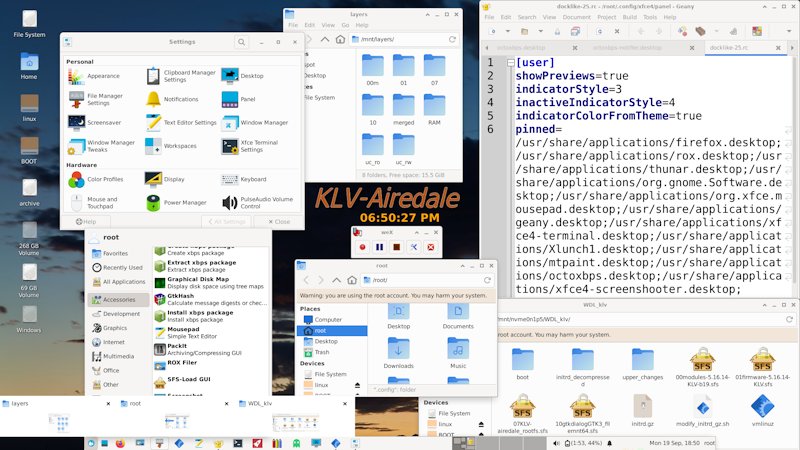 Based on FirstRib - really its flagship build at this time.

Once the build system creates the core root filesystem structure and, for this particular FirstRib build choice, installs the official package manager of Void Linux, a text plugin containing Linux commands is used during the firstrib build to add apps and configurations according to whatever the builder wants in the resulting distro build.

This particular FirstRib build was made by rockedge (Erik), admin/owner of Puppy Linux Discussion Forum (PLDF) via a plugin mainly of his own creation.

It should be understood that a FirstRib-based distro is generally nothing to do with Puppy Linux. That is, it is not a derivative nor code-related unless the builder purposively makes its desktop look similar or choses to add some userland utility apps from there.

In this FirstRib Void Linux build design, rockedge chose by default to use a (huge) kernel from Puppy Linux, containing sufficient drivers within the kernel itself to read most boot media. However, the distro can instead be used with an official Void Linux kernel with a few module-related modifications for complete Void Linux compatibility if so preferred.

Another member of the PLDF, fredx181 (Fred), maintainer and now lead developer of the DebianDog (DD) distributions (which is also discussed on PLDF, but within its own area since also not a Pup-derived distro) further added in several utility apps he had previously developed for some of his DebianDogs.

Once booted, aside from its default use of a foreign kernel, some utility apps, and the flexible frugal install functionality provided to it by FirstRib initrd, KLV-Airedale is in fact a fully upgrade-compatible Void Linux distribution.

As seen in the above image, in my variation of the default KLV-Airedale release, I use the alternative Whisker menu on its Xfce desktop, along with the docklike taskbar, and tiled-windows functionality of Zorin Lite distribution since I really like the look and feel of Zorin.

I have tried out many Xfce-based desktop distros before (including the excellent Ubuntu-based Zorin lite, and the Arch Linux based EndeavourOS), but I have to say that this Void Linux based KLV-Airedale is by far the most efficient Xfce desktop using distro I have come across in terms of low CPU load and initial RAM used after boot (being half that of most others I have investigated). It is unfortunate, therefore, that its existence is not more widely publicised. Indeed, a newcomer to the PLDF would not even know of its existence, since it is buried quite far down under a Puppy Linux derived subforum despite not even being a derivative of Puppy Linux! Hopefully, one day it will be moved to a more obvious front page main releases area, or on some other website, and perhaps marketed via the likes of Distrowatch since, with a bit of further polish, KLV-Airedale really deserves better exposure to the Linux community on the whole in my opinion.